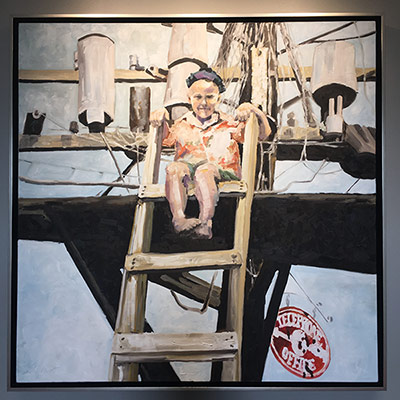 The hot Mississippi morning was filled with summertime’s thick air and a cool morning breeze.  It was only eight o’clock, and he’d already had some early morning adventures running around town with his dog, chasing some cats around the courthouse.  As his small hometown awakened, he was there to greet the day and the neighbors.  His perpetual good nature offered big waves to passengers who passed in cars and big smiles to those he met on the sidewalk.  He knew everyone in town, and they knew him.  He was the youngest of three, always close on the heels of his big sister and brother.  His father was full of good ideas and the willingness to take chances, and he owned the grist mill, the cotton gin, the community swimming pool, and the telephone company.  His mother made sure that her son was taught the right things and that he practiced them.  He was devoted to his family, and his life was filled with love and laughter.  For such a young age, he already had the right balance of confidence and humility.   And at the grand age of eight, he was king of the mountain and the ruler of his destiny, or so he felt.

As he crossed the street back to his front yard, he saw the telephone service trucks starting their day of new installations and repairs.  He stepped into the front room of his house to greet Mary Francis Jones, the operator on duty that morning, who was already busy connecting people who were anxious to talk with others.  He waved as he walked through the front office into the hallway that led to the kitchen, where he could smell the chocolate pie his mother had just baked.  He snitched a little taste of the chocolate as he glided by the counter and gave his mother that little smile that always made her smile back.   Then he was out the door again and on to his next big adventure.

As he walked out the door, the first thing he spotted was the telephone pole that stood right next to the magnolia tree in his front yard.  He’d watched the guys climb effortlessly up and down many such poles, and he decided today would be the day to look at the world from a higher vantage point.  So he steadied his hat, took a deep breath, and began his trek.  Fortunately, that particular pole had a nice, firm ladder attached that made it easier than climbing with hooks like the installer/repairmen.   As he pulled himself higher and higher off the ground, he imagined that he was climbing into an airplane, looking forward to seeing the world from up there.  He moved carefully and acutely, taking care with each step up, pulling himself upward with his arms as his feet followed.  He was strong and determined.  He was excited and encouraged as he reached the top and sat on the flat boards that now served as his throne.  From that height, he could see the entire town – the bank, the library, the swimming pool, and the church – all stretched out before him.  He was silent as he peered across the buildings, watching cars, people, and clouds.  He felt secure, accomplished.  He glanced up at the soft white clouds.  They seemed so close he imagined he might just be able to reach out and touch them.  He felt close to God up on that pole, and he knew that his Heavenly Father’s arms were wrapped around him.  He has always known that.  As his eyes viewed the world from this new perspective, his mind wandered far away to worlds unknown, to new ideas and new adventures.  He soared high in his thoughts and enjoyed the peaceful quiet that superseded even the birds’ songs.

It was a super way to spend the morning.  He smiled to himself, completely content with his world.  Then his imagination was interrupted by his sister’s voice, “Joseph Donald, where are you?  It’s time for lunch.”  He gave a whistle, and she looked up – at first with a bit of concern.  But that quickly faded into a smile as she hollered, “Don’t you move.  I’m going to get my camera!”

And so, that sweet moment was captured in the blink of an eye.  That picture has been passed down through the years, and it will always be my favorite.  Based on my own early days in Bay Springs and the many heart-warming childhood stories he has shared with me over the years, this is how I imagine my Dad might have spent that fun, carefree, summer morning.

Recently, many of Dad’s family, friends, and colleagues celebrated his 55 years of service to our company with the unveiling of a very special portrait of him, our wise leader.  Everyone waited anxiously to see what new treasure hung on the wall in the lobby of TEC Jackson.  And when the veil was removed, one could feel the brief gasps of air and hear the silence that followed as we all marveled at the beautiful portrait.  That photograph from my father’s childhood has been transformed into an amazing work of art by local artist, Jaqueline Ellens.  I am so thankful for Jaqueline and how she has shared her gifts with us through her painting. She created a work of art that will be enjoyed by many throughout the years to come.

The portrait captures my father’s sense of adventure, his compassionate heart, and his true love for others.  I see the sparkle in his eyes and the warmth of his soul.  Each day I am grateful for him; he is truly an inspiration and a blessing.  I admire his wisdom and his ability to lead.  I look to him for guidance, encouragement, and support; and he is always there.  He has done an incredible job growing our company, and his dedication – from the early age of eight and continuing through today – is evident.  I feel a part of his adventurous spirit in every aspect of TEC, and I look forward to working through the next 55 years with all of those who are part of our company and make it so special.  As we begin the second half of this year, let’s all reach down inside ourselves, and discover again some of Dad’s sense of childlike enthusiasm, adventure, and compassion.  And let’s work with renewed energy and dedication as we continue this great adventure that began so many years ago.

Grow your career with our incredible team.